You’re driving home, listening to the radio and a favourite song from the 80’s comes on. You suddenly indulge in the cherished, personal moments it evokes, and you feel a sense of warmth and security. Our memory seeds out the best things from the past and leaves us longing for them, clinging onto their remains whenever we can - whether it’s a scent, a sound, a special place.

And although we can’t go back in time, we can always find ways to keep the good things rolling, and even improve them. 15 years ago the climbing industry could offer only walls from natural wood, just because the coating techniques we have today were still underdeveloped. Some time later, technological progress allowed us to produce the modern look we’re accustomed to now, with its variety of beautiful textures and colourful patterns.

Walltopia is now bringing the natural wood back as a desired element in any modern climbing wall. With its warm vintage appearance, it brings comfort and good memories of the old times to make climbers feel home. One of the places where you can find this old-new style is Project Hangar 4 in La Coruna, Spain.

Climbing by the sea

La Coruna is a small Spanish port city located on the Galician coast. It is rich in history and sights, among which is the oldest Roman lighthouse still used today. It also happens to be the hometown of the world-class climber Finuco Martinez who consulted the project.

As he likes to say himself, “Finuco is climbing, and climbing is Finuco”. He was the sixth man in the world to climb the Yosemite classic - 'Midnight Lightning', also known as the world's most famous bouldering problem - yes, that one at Camp 4 with the sprayed lightning. Back in 1983, at the age of 17, together with his partner who was 16, they became the two youngest climbers to send El Capitan. They held the record for 36 years until last year.

“This project in La Coruna made me very proud because La Coruna is a city of nowhere - when I started climbing many years ago, it was only full of fishermen. The town is looking to the sea, not to the mountains.”

The community side of climbing

Spain is full of beautiful rock formations and has always been a hot spot for climbers. Also, in the last 10 years, indoor climbing has seen a steady rise, especially since Chris Sharma opened his gym in Barcelona in 2015 in cooperation with Walltopia. Indoor climbing caters to a different and broader public compared to rock climbing and that’s demonstrated by the fact that 80% of the Hangar 4 visitors don’t go climbing outside.

“If all the people were to go outside, it would be bad for nature. They don’t want to. They combine it with going to zumba and other activities, you can also spend time with people, having a drink in the gym. It’s very social - they like the community part of it”, adds Finuco.

This comes from the variety of activities the gym offers - as the designer of the project Petar Iliev shares, they managed to fit a few facilities into the space, which encourages people to be active together and turns climbing into a social experience.

“The gym incorporates a dedicated training room where climbers can polish their skills and techniques, two boulder areas, a tall climbing wall suitable for beginners, a resistance wall with a 35° incline, a studio for yoga and other directed activities, as well as a cafeteria/bar.”

This feeling of belonging and comfort is enhanced by the natural wooden surface of the climbing walls inside. As Finuco describes it, Hangar 4 is the “typical industrial space”. The combination of natural wood and graphite panels made it into a cozy, inviting destination, letting the routes stand out and be a colourful accent to the interior.

The key feature of wood is its versatility - it can be used just by itself or as a signature element of a multi-color design, be it graphite, as in Hangar 4, or any bright color. Another popular combination is natural plywood with teal and an interesting design experiment Walltopia recently did was combine it with magenta and it looked superb. In short, wood gives you enough space to personify your wall to fit into your interior goals while delivering a feeling of coziness and warmth. 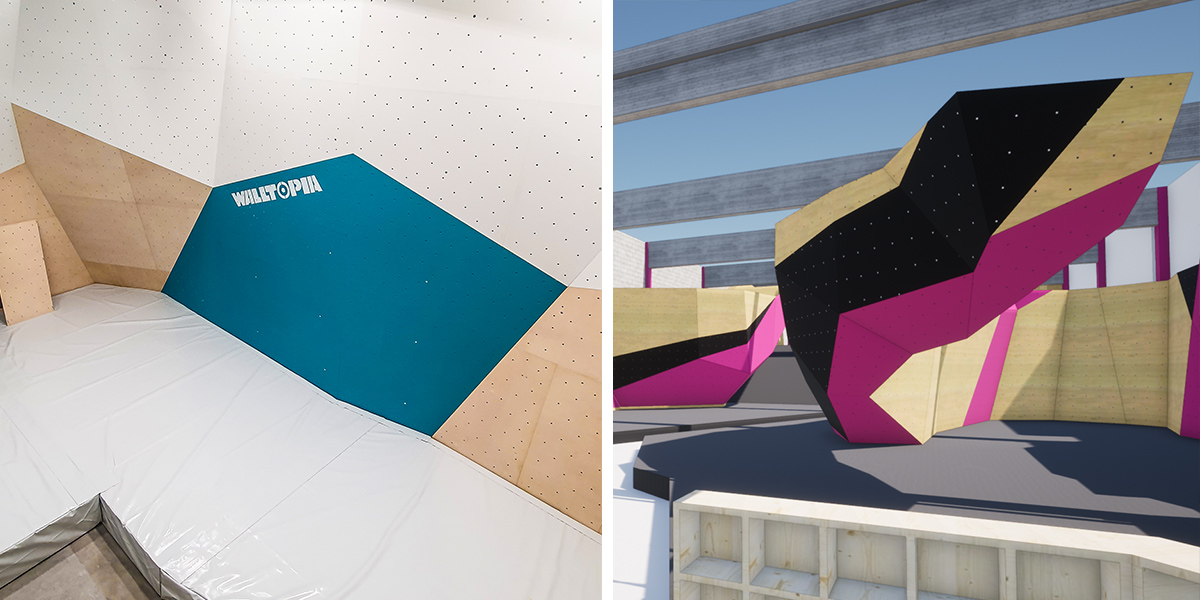 The wood surface might look demanding in terms of maintenance but in reality Walltopia wood panels are covered with rubber resistant coating which makes it easy for the operators to take care of them. They also offer exactly the same amount of friction as the regular Walltopia climbing panels, but in combination with a warm, quaint feeling which makes everyone feel like home.

More in this category: « And the Winner of a Home Climbing Wall Is...

They did fast, quality work, always with …

“ We are incredibly thankful for the effort that our Walltopia crew put into this gym. They did fast, quality work, always with a smile and were a pleasure to work with. We hope the Skopsko is going down smooth, boys! We'll see you in Rochester when you come back to climb on your handiwork... or maybe in Bulgaria?!

“Walltopia has made quick work of the structural steel for the tall climbing walls! Paneling will go up over the next few weeks. We're blown away by how quickly over 10,000 sq ft of climbing surface up to 50 ft tall can come together!

“These guys are part of the Walltopia crew that is assembling our climbing walls, and doing a dang fine job of it! They work long hours making these walls look good and making sure they're safe.

...you can be assured they will be AMAZI …

“Who are building our climbing walls? What will they look like? With a company like Walltopia you can be assured they will be AMAZING!

Walltopia is rocking this job from start …

“The walls Downtown are really coming together, and we couldn’t be more excited!
Walltopia is rocking this job from start to finish. It’s going to be a beautiful gym, and very, very FUN.

Thanks for your amazing and faultless se …

“You are part of the dream and the journey Walltopia! Thanks for your amazing and faultless services. Special thanks to Marina,Ani and Steve for helping the dream along! Love to the Walltopia Massif.

Thanks for your amazing and faultless se …

“You are part of the dream and the journey Walltopia! Thanks for your amazing and faultless services. Special thanks to Marina,Ani and Steve for helping the dream along! Love to the Walltopia Massif.

I just wanted to say how impressed I am …

“I was at Harrow yesterday. I just wanted to say how impressed I am with the Walltopia build. Great finish but also the components and skill that has gone into all the fabrication is fantastic. A few little issues but nothing unusual so far.

Walltopia has employees that are second …

“Walltopia has employees that are second to none. From the contracts to communication to sending people out to build, we've been NOTHING but impressed. And that means a lot since we've been working with contractors on various gym builds (and building our own ourselves) for a while.

“I'd like to thank Walltopia, the head office staff, Rob Parer and the crew here who assembled the wall for the fantastic job they did! We're really happy with it.

We give Walltopia our highest recommenda …

“When we started planning the gym, we considered all wall vendors. However, when we met with Yasen and the Waltopia team, we knew immediately that we had found the right partner to build a gym.

Funwalls has proven to be a fantastic ad …

“As the owner of more than one climbing gym, Funwalls have provided quick cash flow for the start up & assisted in filling a marketing gap we didn't know existed. The elements have also been an effective way to broaden our market segment that can seamlessly transition into our climbing gym business.

If you can dream it, they can build it.

“If you can dream it , they can build it .We needed a reliable wall company that would respect our budget, timeline without sacrificing the quality of the final product. We're incredibly pleased to be working with Walltopia once again for our third project in three years!

Walltopia Canada has been a great resour …

“Walltopia Canada has been a great resource for us to open and develop our climbing gym. Their service is first rate, and they always work hard to make everything right for us.

Our experience with Walltopia was terrif …

“Our experience with Walltopia was terrific. They were incredibly easy to work with, and their knowledge and experience really took a lot of the stress out of the process for us.

Yasen and Walltopia were great to work w …

“Yasen and Walltopia were great to work with.  They were professional from the beginning of the project to the very end.

Walltopia was consistently described to …

“ Walltopia was consistently described to us as the top wall vendor out there.  They lived up to and exceeded their reputation.

We thought going local would be better b …

THANKS - for the great work you all have …

“Dear WALLTOPIA-Team,
THANKS - for the great work you all have done, to create and build a fantastic climbing wall.

...working with the Walltopia Family is …

“The experience once again reaffirms why working with the Walltopia Family is the right choice for NOMAD."

The angles are amazing, the quality is t …

“In an effort to bring a modern facility to Kelowna, Chris brought in Walltopia (one of the world's premier wall companies) to design and build the walls. The angles are amazing, the quality is terrific and the height leaves nothing to be desired.

By selecting the "Accept All" option, you agree to the use of all cookies in accordance with the Information for the use of cookies on the Walltopia websites.